Marsha Ward is a multi-published freelance writer, editor, workshop presenter, mentor, consultant, and the author of five novels (so far) in The Owen Family Saga: Gone for a Soldier, The Man from Shenandoah, Ride to Raton, Trail of Storms and Spinster's Folly. She contributed sections and chapters to two non-fiction books on writing and publishing, Writing Secrets and Publishing Secrets. Marsha also has over 900 published articles, columns, poems, and short stories to her credit. Her essay, "Perfect in Salt, Perfect in Soda," a tribute to her mother, was published in an anthology, Mother's Wisdom, in May, 2008.

Marsha was born in the sleepy little town of Phoenix, Arizona, and grew up with chickens, citrus trees, and lots of room to roam. She attended Madison Elementary schools in Phoenix: Madison I, Richard C. Simis, and Rose Lane, and then graduated from Simis in 1960. She graduated from Camelback High School in 1964 and attended Arizona State University at Flagstaff (now known as Northern Arizona University) for one year. Later, in the 70s, she attended Phoenix College for a year. She believes in continuing education, and has attended many college classes through the years. If she ever has any spare time, she might get her degree later.

Marsha began telling stories at a very early age, regaling her neighborhood chums with her tales over homemade sugar cookies. Visits to her cousins on their ranch and listening to her father's stories of homesteading in Old Mexico and in the Tucson area reinforced her love of 19th Century Western history, and by extension, fiction of and about the era.

Before her marriage, Marsha lived in South America for two years as a missionary for The Church of Jesus Christ of Latter-day Saints, and she still loves traveling to exotic, unusual, and interesting places.

Marsha married Rob Ward in 1972, and they had five children and a happy life. As her children grew, Marsha began to study writing in earnest, and wrote with a view toward publication. She fell into journalism and started to get pieces published in newspapers. In the meantime, she hauled out the "opus magnum" she had started in 1965, and worked on it for several years, tweaking and rewriting. Then she began the long process of submitting, and wrote another novel to tell more about her characters.

Adversity came along, and suddenly the Wards had only four children. Marsha's creativity dried up for several years as the result of her younger daughter's death. Three of her four children were grown and poised to be on their own when her husband was diagnosed with a quick-acting cancer, and inside of a year, he was gone. One son had married while his father was still alive, and two of his siblings moved out in the months following. In six months' time, she went from a household of six to one with only two people in it. It was a severe downsizing.

When Marsha had a health crisis a few years later, the outcome of which was suspected to be severely debilitating, if not fatal, she decided to self-publish her two finished novels. Fortunately, she recovered, and the books were well received by both readers and critics.

When her last child married and moved out, Marsha sold her home to a family member, and now lives under Central Arizona's magnificent Mogollon Rim. She is a member of several writing organizations, among them Western Writers of America, American Night Writers Association, LDStorymakers, Women Writing the West, and Indie Author Hub.

Marsha is now working on a novel that is only laterally connected to her Owen Family Saga, although she has plans for another work set in Virginia after the American Civil War.

When she is not writing, Marsha loves to travel, give talks, meet readers, and sign books. She welcomes readers' comments addressed to her at:
PO Box 53
Payson AZ 85547
or by email to: marshaward.az@gmail.com

"If you want accurate time and place, wonderful lexicon of the time, and a touching, compelling read, don't miss Marsha Ward's THE OWEN FAMILY SAGA." L. J. Martin, author of NEMESIS and other western novels.

Title: THE ZION TRAIL
What that is: A novel set in the 1840s dealing with the Mormon Migration
I'm doing: Writing
Word Count: 14,361

Project Title: Not yet ready for revelation
What that is: Ella Ruth novel/novella (an HEA for her)
Status: Cover purchased
Word Count: 0

Project: James Owen's new novel
What's up with that?: It came out of the blue, I swear.

Project: An Owen Family Short Story
What it is: Julianna and Roddy have an adventure

Characters in The Zion Trail

The players in my work-in-progress are: 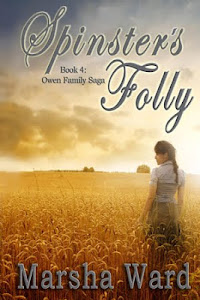